In 1845 John Louis O’ Sullivan in his essay Annexation advocated it was Divine Providence for the United States to embrace its “manifest destiny” to spread the American system across the continent.  Little did Mr. Zitkala-sa was born on the Yankton Indian Reservation and raised by her mother after her European father abandoned the family.  Aged eight, she was taken by missionaries to the White's Manual Labor Institute in Wabash, Indiana.  Here she learned

"I was a very small child when the first white people came into our country.  They came like a lion, yes, like a roaring lion, and have continued so ever since, and I have never forgotten their first coming."

Having spent part of her adolescence

Lozen (c. 1840-1890) was a skilled warrior and a prophetess of the Chihenne Chiricahua Apache. She was the sister of Victorio, a prominent chief. Born into the Chihenne band during the late 1840s, Lozen was, according to legends, able to use her pow Kintpuash (Strikes the water brashly), better known as Captain Jack (circa 1837 - October 3, 1873), was a chief of the Native American Modoc tribe of California and Oregon, and was their leader during the Modoc War. Originally named Mama-day-te, this Kiowa saved the son of Old Chief Lone Wolf (Gui-pah-gah) and was given his name. He later avenged the death of the Chief and his nephew at the hands of United States troops.

He and his followers were known as Sitting Bull (c.1831-1890) was the Native American chief under whom the Sioux tribes united in their struggle for survival on the North American Great Plains. Following the discovery of gold in the Black Hills of South Dakota in 1874, the Sioux ca He was the son of Many Bullet Wounds and Eagle Feather on the Forehead.  As a child he was called Eats From His Hand but he had an uncle named Wooden Leg because he was known for walking long distances.  His nephew was the only one who could keep up

E’hyoph’sta of the Southern Cheyenne was born about 1826 and died in August 1915, on the Tongue River Reservation in Montana. Of all the Plains' manly-hearted women, the most ruthless may have been E’hyoph’sta, better known a Leader of the Chihuicahui and Principal Chief of the Chokonen band of Chiricahua, born 1805.

Cochise's father was killed by Mexican raiders which fuelled his determination to defend his people.  In 1848 he was captured by the Mexicans but released i So named because in a skirmish during heavy rain his face became streaked with paint (or perhaps his enemy's blood) he was born in 1835, a member of the Hunkpapa Lakota.

Son of Comanche Peta Nocona and Cynthia Parker, an English-American who had been kidnapped aged nine and assimilated into the tribe, his name means "fragrance". Born in 1828, this Seneca studied law but was unable to gain admission to the Bar because at that time Native Americans were not US citizens.  He was befriended by writer Lewis Henry Morgan whom he met in a bookshop; they collaborated on Morgan's boo 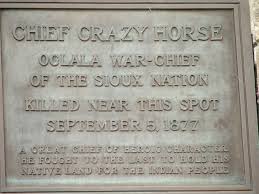 "One does not sell the land the people walk upon."

Unlike Little Wolf, Geronimo and others Crazy Horse did not live to be an old man, dying as a result of treachery at around 35.

He was notable among the Oglala for his appearance, being light skinn The name signifies one who was so capable in battle that even the sight of his horse inspired fear. This Oglala Sioux Chief fought in Red Cloud's War and went on to become the first President of the Pine Ridge Indian Council in 1883. "They made us many promises, more than I can remember.  But they kept but one – they promised to take our land… and they took it."

Red Cloud made a name for himself in territorial wars with the Crow, Ute, Pawnee and Shoshone.  Concerned about the es Born in 1810, he was known for his courage and resourcefulness from a young age.  As a 9 year old he became separated from his family when a herd of buffalo stampeded towards the river bank where he and his sister were playing; he led her to the safe Wolf Robe was a Southern Cheyenne chief whose name first appears in connection with an attack on General Blunt's soldiers in 1864.  His people were forced onto the Cheyenne and Arapaho Reservation in Indian Territory in the late 1870s.