Dwight Birdwell, a citizen of the Cherokee Nation, receives the Medal of Honor during a ceremony at the White House on July 5, 2022.

Birdwell was recognized for his heroism during the Vietnam War. President Joe Biden said the Cherokee soldier went a Of the 3,469 Medals of Honor awarded,29 have been awarded to Native Americans 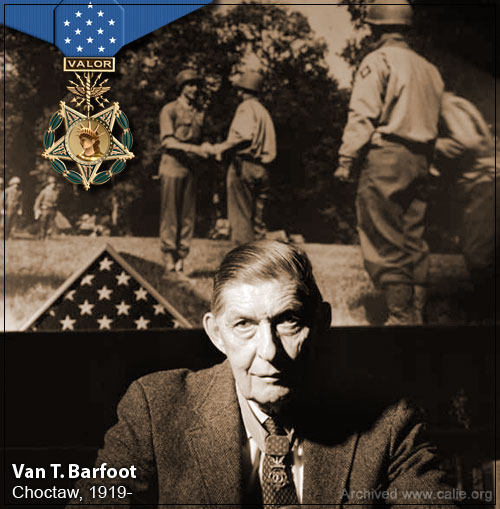 A Choctaw from Mississippi, and a Second Lieutenant in the Thunderbirds. On 23 May 1944, during the breakout from Anzio to Rome, Barfoot knocked out two machine gun nests and captured 17 German soldiers. Later that same day, he repelled a German ta For every famous figure in frontier history, there are others who have fallen into undeserved obscurity.

Everybody has heard of Geronimo; most folks recognize Cochise and maybe Mangas Coloradas — all famous leaders of the Chircahua Apache peo Michael E. Thornton.was one of only 15 U.S. Navy personnel, (three of them SEALs), who received the Medal of Honor for their heroic actions during the Vietnam War A Cherokee from South Carolina and Engineman Second Class. For conspicuous gallantry A Winnebago from Wisconsin, and a Corporal in Company E., 19th Infantry Regiment in Korea. On 5 November 1950, Red Cloud was on a ridge guarding his company command post when he was surprised by Chinese communist f

WIKIPEDIA.ORG: Gregory "Pappy" Boyington: (December 4, 1912 – January 11, 1988) was a highly decorated American combat pilot who was a United States Marine Corps fighter ace during World War II. He received both the Medal of Honor and the Navy Cross. Jack C. Montgomery (7/23/1917-6/11/2002) was a Cherokee from Oklahoma, and a first lieutenant with the 45th Infantry Division Thunderbirds. On Feb. 22, 1944, near Padiglione, Italy, Montgomery's rifle platoon was under fire by three echelons of ene A Choctaw from Mississippi, and a Second Lieutenant in the Thunderbirds. On 23 May 1944, during the breakout from Anzio to Rome, Barfoot knocked out two machine gun nests and captured 17 German soldiers. Later that same day, he repelled a German ta

Woodrow Wilson Keeble was a U.S. Army National Guard combat veteran of both World War II and the Korean War. He was a full-blooded member of the Sisseton Wahpeton Oyate of the Lake Traverse Reservation & the first full-blooded Lakotah to receive the