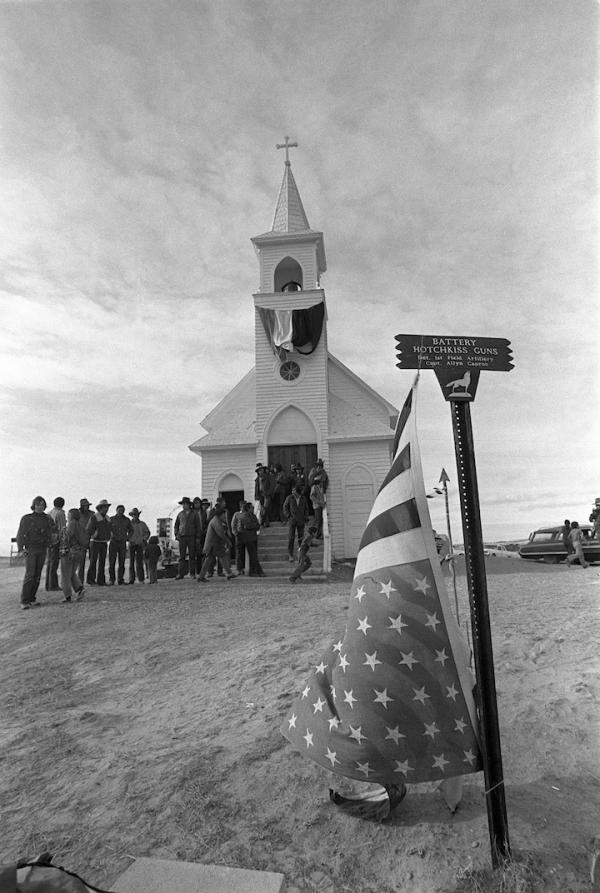 Wounded Knee is hailed as one of AIM's greatest successes

This Date in Native History: On February 27, 1973, about 250 Sioux Indians led by members of the American Indian Movement converged on South Dakota’s Pine Ridge Reservation, launching the famous 71-day occupation of Wounded Knee.

Set in the same impoverished village as the 1890 Wounded Knee massacre, the occupation called global attention to unsafe living conditions and generations of mistreatment from federal and local agencies. The occupation, which began during the evening of February 27, is hailed as one of AIM’s greatest successes.

“In a way, it was a very beautiful experience,” said Len Foster, a Navajo man who joined AIM in 1970 and was at Wounded Knee for the entire 71 days. “It was a time to look at the commitment we made and a willingness to put our lives on the line for a cause.”

Formally founded in July 1968, AIM included activists like Russell Means, Clyde Bellecourt and Dennis Banks. The organization, which at one point was labeled one of 50 terrorist groups in the country, actually started more than 200 years earlier, according to a 2013 book published by the Minnesota Historical Society, We Are Still Here: A Photographic History of the American Indian Movement.

More than two centuries before AIM was formed, Sitting Bull, the Hunkpapa Lakota chief who helped defeat Lt. Col. George Armstrong Custer in the 1876 Battle of the Little Bighorn, said American Indians would defend their rights.

“We are poor… but we are free,” Sitting Bull said. “No white man controls our footsteps. If we must die… we die defending our rights.”

Wounded Knee was not the first AIM occupation—or the only one. Members of the movement participated in the takeover of 74 federal facilities, including Mount Rushmore, the Bureau of Indian Affairs building in Washington, D.C., and the replica of the Mayflower. Protesters used the occupations to call attention to Indian rights and demand that the government honor its treaty obligations.

The Wounded Knee occupation began after elders of the Oglala Sioux tribe complained about being ignored by a corrupt tribal government. Unable to impeach Chairman Dick Wilson, who had a private police force on his side, tribal members asked AIM for help. Wilson, along with his armed supporters known as the Guardians of the Oglala Nation, anticipated the occupation and called in FBI agents and U.S. Marshals, who set up a perimeter about a mile outside of the AIM defense line.

Meanwhile, members of other tribes and civil rights groups flocked to the area to offer support. Both sides were heavily armed and federal troops prohibited people from delivering food or medicine to the protesters. Firefights broke out, and two Sioux men were killed.

Foster participated in 11 firefights with U.S. Marshals and FBI agents.

AIM members were young, Foster said. Most were in their early 20s and eager to take a stand against corruption, he said. Federal agents took over the tribe and provided weapons and ammunition.

“Their presence was a sign of oppression,” Foster said. “The traditional peoples’ rights were being ignored.”

Protesters on several occasions were prepared to die during the occupation, Russell Means wrote in his 1995 autobiography, Where White Men Fear to Tread. Prior to taking over the village, the protesters agreed that death was a price they were willing to pay.

“Things could not continue as they were,” Means wrote. “If we didn’t stand up now for our treaty, we would never be able to do so. Our people were ready to die, if necessary, to end the abuse.”

Negotiations were held throughout the occupation with protesters demanding a federal probe into problems on reservations and solutions to long-standing issues of poverty and dependence. The Nixon administration, meanwhile, declared it wanted an end of this “revolutionary Indian element” before it reached other areas of Indian Country.

“Wounded Knee opened a lot of hearts and minds to what oppression we were suffering,” he said. “We were downtrodden, oppressed, made to feel ashamed. We were told to cut our long hair, not to participate in ceremonies, to become Christian and burn our medicine bundles. All the decisions we made at Wounded Knee affect our children, grandchildren and great-grandchildren.”

Protesters surrendered May 8, and federal agents arrested 1,200 people, resulting in 275 cases in federal, state and tribal courts. Among those tried were Means, Bellecourt and Banks, who each faced 11 criminal charges stemming from the occupation. The men were acquitted because of evidence that the FBI had manipulated key witnesses.