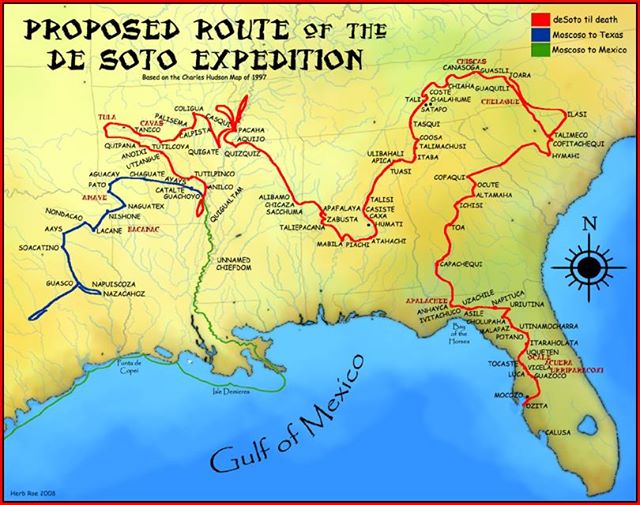 Try to remember that the mentality of the U.S.was already 'indoctrinated' by the 1493 Papal Bulls. In 1539 Hernando DeSoto, with a thousand men, landed and marched north through Florida, Georgia, the Carolinas, then southwest through Tennessee, and into Alabama. On October 12, 1540, he had his first meeting with Tuscaloosa or Black Warrior, Chief of the Maubila. DeSoto then takes the chief hostage. On October 18, DeSoto attacks the Natives at the town of Maubila (Mobile, Alabama).
In short, eighteen soldiers fell in combat, two-hundred and fifty were wounded and leaving the Maubilan city burned and 11,000 Natives killed including Chief Tuscaloosa. In one afternoon, the town of Maubila was erased from the maps of the day.
What led Desoto to do what he did?
In America, it began with Columbus 1492 – then he returns to have an influence upon the king and queen of Spain, who were under the rule of Pope Innocent VIII who died in August of the same year. Innocent was replaced by Alexander VI who bought and bribed his way into the papacy, issued the Inter Caetera or Papal Bulls of 1493.
The U.S. Treaties were influenced and written in the etymological language of Latin or the Roman language, for example, the 1492 New World discovery “claiming and possession ceremony” by Columbus, the 1493 Papal Bulls, the Monroe Doctrine also which lays claim to the western hemisphere and is a principle of US policy, originated by President James Monroe in 1823, that any intervention by external powers in the politics of the Americas is a potentially hostile act against the US..
The Spanish Requirement of 1513 ("El Requerimiento") was a declaration by the Spanish monarchy of its divinely ordained right to take possession of the territories of the New World and to subjugate, exploit and, when necessary, to fight the Native inhabitants and to exterminate. The Requirement was read in Spanish to Native Americans to inform them of Spain’s rights to conquest. Those who subsequently resisted conquest were considered to harbor evil intentions. The Spaniards thus considered those who resisted as defying God’s plan, and so used Catholic theology to justify their conquest.,
Today the use of the English language in America was used to negotiate all 597 treaties the U.S government signed with the Native populations. 60% percent of the English language is based on Latin and their meanings used to dominate, control, commit war, possess, marginalize, exterminate and rationalize occupancy of the lands in the Western Hemisphere based on the "fraudulent' document called the Papal Bulls of 1493; and that can be applied to any movement within the western hemisphere regardless if it is left, right or from Mars - it's a "war" language.
E-mail me when people leave their comments –
Follow