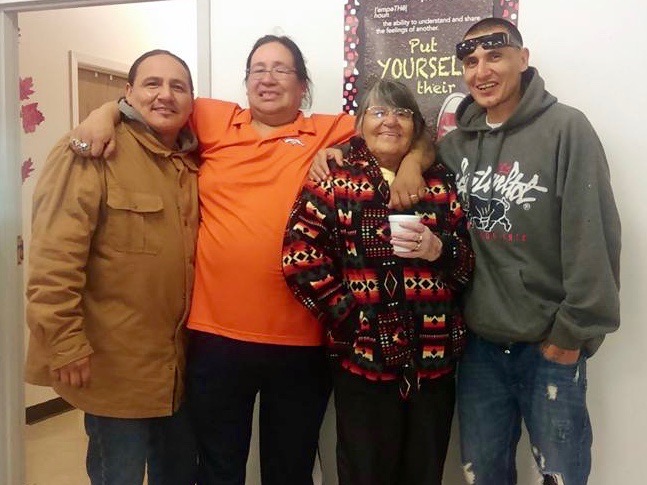 PIERRE,SD – Both Native American and First Nations community members are disappearing and/or losing their lives to violence and unknown causes at alarming rates.

Recently, the Missing and Murdered Indigenous Women (#MMIW) movement has placed focus and emphasis on the epidemic of girls and women who are killed and/or disappear, although it is indigenous men and boys who are missing and murdered at a higher rate.

The border between the United States and Canada separates the two, but remains an invisible barrier between the commonalities shared by Native Americans and First Nations, including the socio-economic conditions which lead to elevated crime statistics and the inability of law enforcement to solve these crimes. This can be for many reasons, including the isolation of the areas where the tribal members reside.

As in any First Nations and Native American tribal community, the membership is generally low in these indigenous countries, so when one person is killed or disappears, this loss if felt throughout the whole of the tribe. In many cases, this person is related to a large portion of the tribe or known by most.

In the United States in 2016, there were 108 American Indians and Alaskan Natives arrested for murder and non-negligent manslaughter, according to the 2016 Crime in the Unites States Report by the Federal Bureau of Investigation. Of those 108 arrests, 9 were under age 18 (juveniles). This report does not include the deaths that are under investigation or remain unsolved. From left, the daughters of Keven Duane Marshall, Calista Marshall, Oriana Marshall and Chantel Marshall stand with their mother, Candice Hall, near downtown Rapid City are asking that more be done in the search for Marshall and others. Photo by Richie Richards
One such story of a missing Native American man is that of Kevin Duane Marshall, who disappeared on May 18, 2016 from the Eagle Butte, South Dakota, on the Cheyenne River Reservation.

The mother and daughters of Marshall would like his story told.

Marshall was living on the outskirts of Eagle Butte in a family-owned trailer. He was last seen by family members who were leaving Eagle Butte to travel to Rapid City for high school graduation week ceremonies. Marshall’s oldest daughter, Chantel, was graduating from Rapid City Central High School on May 22, 2016.

Rumors have swelled since the disappearance of Marshall. Theories have come in from all directions; some of those stories lead to Rapid City, other reservations and other states. But to this day, a solid lead or verifiable story has not been confirmed. Marshall’s daughters feel their dad is no longer being searched for.

The family believes that the last person to see Marshall was his sister or mother in Eagle Butte. According to his daughters, an argument occurred close to the time of his disappearance between Marshall and his girlfriend at the time.

Marshall’s oldest daughter, Chantel, 19, did not have the best of relationship with her father, in part due to him being in and out of her life. She claims her father suffered from addiction, which would lead to incarceration, which lead to prolonged periods of absence in her life.

“We kind of had like a love/hate relationship. He would be nice at times and other times he would not. Whenever he was on drugs, basically, I wouldn’t like him,” said Chantel. But it wasn’t all bad. Despite the erratic behavior, the eldest daughter loved her dad. “We’d laugh and make jokes and we’d do father/daughter things.”

The absence of the father figure in the three teenagers’ lives is apparent in visiting with them. An emptiness resides in their eyes as they talked about the good times and bad times.

The second oldest daughter, Oriana, 17, considered herself to be the “daddy’s girl”. This Rapid City High School student had a strong bond with Marshall. “We were really close. We did everything together”, said Oriana.

The daughters are humble in their narrative and upbringing. Part of the Oriana’s memories of her father included going out shoveling sidewalks in the winter for money. “We would go for walks and try to make up some money,” she said. “One time, we couldn’t get our car out of the driveway, so we started walking to Family Thrift with sleds. We were both pulling the sleds with the food on them.”

When Oriana told her father that she “liked girls”, she was nervous for his reaction in telling him about her sexual preference, but his reaction was that of acceptance and empathy. “He was really accepting. He cared and didn’t get mad at me or anything,” she said. “He said he would love me no matter what and started hugging me.”

Oriana misses him coming to her basketball games and going to powwows together. “He was proud of me making 3-pointers when I was playing basketball at South Middle School. He would always encourage me to try harder. It made me happy and excited to have him there,” she said.

Marshall’s youngest daughter, Calista, 15, is a well-spoken young woman who commands respect. One of the last times she seen her father was on her birthday in April, 2016 when they had a father/daughter conversation. “He gave me money and we visited for a few minutes. Our relationship was good and he was always teasing me,” she said.

Calista remembers the good and bad times as well. She misses the fun times, including when they “used to play on the Wii and he would sit with his face like five inches from the screen,” she said laughing with tears in her eyes.

When asked what she missed most about her dad, Calista said, “Him. Laughing with him. I wish I could just be with him and hug him. Him not being able to see me graduate and be proud of me. He was proud of us for growing up and doing stuff, but he won’t be here to see it,” she said crying.

When a child loses their parent in a traditional manner, they generally have a place to pay their respects, may it be a gravesite or the place where death has occurred. For these three young ladies, that place does not exist. They are dependent on law enforcement and investigators to give them an opportunity to mourn and for “closure”.

“They should probably try harder. They’re not really doing anything,” Calista said of the current state of the investigation into her father’s disappearance. “She (mom) tries calling them, now and then, and they say, ‘Oh, we’ll set up a meeting’, but no one ever does,” she said.

According to their mother, the last time she contacted the tribe to help was in November, 2017. “I was trying to get the tribal council to set up an award for him. They kept saying they have to wait for all the council to be there,” said Hall. “Everyone else that is missing around town, I see their billboards and fliers but none for him (Marshall).”

Hall claims her many phone calls result in nothing new in the case. “I call and talk to Larry LeBeau (detective) but he never has no new leads or anything. He don’t know anything. I last talked to him on this Monday. He said they had nothing to go on,” Hall said.

Part of what is upsetting to the young women, is the reaction from the family of Marshall. They feel his disappearance has caused division and separation. “I miss him every day. It’s very difficult without him here. Everybody’s just in pain and fighting. People dislike each other”, said Oriana.

The daughters remain hopeful that Marshall is found and have not given totally to the fact that he may be deceased. “I just hope he’s proud of me, because I’m really trying in school right now,” said Oriana. “It’s hard. I just feel empty. There’s nothing in my heart right now. I just want him home and then I will feel whole again and everybody will feel whole again.”

The daughters and their mother have offered to help in the search for Kevin Duane Marshall and have claimed that fliers posted around Eagle Butte have been taken down for an unknown reason. “My dad didn’t like to show his emotions, so I feel like he wouldn’t want us to cry or be sad. He just wants us to live our lives,” said Oriana.

Calista would like to see more done on behalf of her father and family. “No one’s really did searches for our dad. They had done a walk but it was last minute. It’s mostly just our family going from Rapid City to go look for him,” she said.

The daughters and mother were a part of the initial search party. “It was sad. We saw a lot of eagles that day and I think that was my dad,” said Calista.

The lives of murdered and missing First Nations and Native Americans often become lost in the larger narrative of data collection and statistics, rarely do the stories of the individuals get told.